Bluey follows the adventures of a lovable and inexhaustible anthropomorphic six-year-old Blue Heeler puppy who lives with her dad, mum and four-year-old little sister, Bingo. In every episode, Bluey uses her limitless Blue Heeler energy to play elaborate games that unfold in unpredictable and hilarious ways. The first 26 episodes from season one aired on ABC Kids at 8AM from Oct 1st to Oct 26th, 2018. The second half aired from April 1st to April 25th, 2019. The Christmas episode “Verandah Santa” aired on December 12th, 2019. On May 16th, it was announced that the show would be getting a second season that will air in 2020. Bluey made its international debut on Disney Junior in the United States on September 9th, 2019.[1]The first half of season two aired from March 17th, 2020 to April 11th, 2020. The second half of season 2 aired on ABC Kids from October 25th, 2020 to November 17th, 2020. The second Christmas episode “Christmas Swim” aired on December 1st, 2020. In October 2020, the show was renewed for a third season. A sneak peak preview of Season 2's Easter special was first shown as part of the 2021 Together promo for the ABC Me and ABC Kids channels during the 2020 NYE Early Night Show, previewing next year's programming for both channels (which later aired on both channels a day after). The episode “Easter” aired on April 4th, 2021.

In July 2017, the Australian Broadcasting Corporation and the British Broadcasting Corporation co-commissioned Bluey as an animated series for preschool children to be developed by Queensland production company Ludo Studio. The production received funding from Screen Australia, with the setting of the series drawing upon the unique semi-tropical Queensland climate. Created by Joe Brumm, the series was inspired by his experience in raising two daughters. Brumm wanted to portray the importance of children participating in imaginative play, creating the title character Bluey as a Cattle Dog to give the series an Australian voice. Brumm had previously worked in the United Kingdom on programs such as Peppa Pig and decided to create Bluey as a replica of the program for an Australian audience. He conceived the idea independently in 2016 and approached Ludo Studio to develop it. The series was pitched at the Asian Animation Summit in 2016, and was noticed by ABC and BBC executives for having the unique tone that they were searching for. The two networks ordered 52 seven-minute episodes, with BBC investing 30% of the funding and acquiring the global rights for distribution and merchandising. The series was produced entirely in Australia by a local team, many of whom were first-time animators from Brisbane. The program was announced to premiere in Australia on ABC Kids, followed by CBeebies. 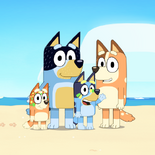 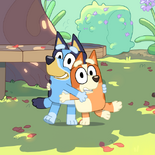 A preview of the new episode of bluey, Easter.

Another preview of the new episode of bluey, Easter.

Another preview of the new episode of bluey, Easter.

There have been several episodes when Bluey uses sound effects (most sounds from Sound Ideas) to make the plots of the episodes more bright or dramatic.

Community content is available under CC-BY-SA unless otherwise noted.
Advertisement