Bluey Wiki
Register
Don't have an account?
Sign In
Advertisement
in: Characters, A to Z, Main Characters,
and 6 more

Bandit is a main character, the husband of Chilli, the older brother of Stripe, father of Bluey and Bingo, and uncle of Muffin and Socks.

"Dad is an archaeologist (he loves to dig up bones). As the devoted, yet tired father, he does his best to use whatever energy is left after interrupted sleep, work and household chores, to invent and play games with his two girls. He still tries to continue his own life amidst the chaos of childrearing but often struggles to juggle these two competing tasks!"

Bandit is a character that loves to play with his daughters. He will take his role in a game seriously even though he's often seen unwilling and reluctant whenever his daughters mention a game to play. While playing with his daughters, he often teaches them life lessons along the way.

Bandit is one of the members of the Heeler family. He's the husband of Chilli, the father of Bluey and Bingo, brother of Rad, older brother of Stripe, brother-in-law of Trixie, son of Bob and Nana, the uncle of Muffin and Socks and the son-in-law of Grandad. He works as an archaeologist.

When he was younger, Bandit spent time in England, where he met Chilli. There is “some dispute” as to the exact circumstances, but it apparently took place “at a party in London.”[1] Chilli would later recall that Bandit had a finger up his nose when they first met.[2] The two began dating, and eventually went on a backpacking trip to Italy. While there, Bandit proposed to Chilli, and she accepted; the pair were later married.[3]

Among the guests at the wedding were Frisky, who would later become Bluey’s godmother, and Bandit’s brother Rad. The venue included a pool, which Rad “probably” fell into.[4] Some time afterwards, Chilli became pregnant, later giving birth to Bluey.[5] Bandit would later claim to have “wrecked [his] back changing [Bluey’s] nappies.” Bingo, their younger daughter, was born a couple of years later.[6]

The following is a list of Nicknames used for or by Bandit throughout the series.

Bandit dancing in the intro 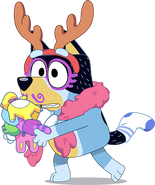 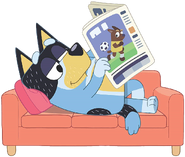 Bandit reading the newspaper on the lounge 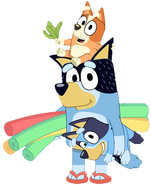 Artwork of Bandit, Bluey and Bingo as seen on the DVD cover of The Pool & Other Stories

Bandit holding Bingo while Chilli goes to a baby shower.

Bandit and his Family having dinner.

Bandit and Chilli putting the kids to sleep.

Bandit as part of Mount Mumandad.

Bandit captured by Jean-Luc and Bluey.

Bandit and Bluey take a budgie to the vet.

Bandit and Chilli in the kitchen with their daughters and nieces.

Bandit taking his daughters to the Dump.

Bandit trying to go to work.

Bandit about to have a job interview.

Bandit and the Family hiding in the pantry.

Bandit and Chilli in the park with the kids and a friend.

Bandit taking the girls to the Beach.

Bandit taking the girls on a Wagon Ride.

An injured Bandit waiting for The Doctor.

Bandit and his family in his study.

Bandit and his daughters at a takeaway restaurant.

Bandit and Bob Bilby with the family.

Bandit watching Bluey on the Bike.

Bandit and his daughters.

Bandit reading to Bluey and Bingo.

Bandit and the Heeler Family having a BBQ.

Bandit playing in the yard with his family.

Bandit visiting The Creek with his daughters and Mackenzie

Bandit and Chilli as sketches as seen on Escape.

Bandit with Bingo and Bluey at the takeaway restaurant

Bandit being leashed by Bluey and Bingo

Community content is available under CC-BY-SA unless otherwise noted.
Advertisement